North American Retail is in a state of flux. Consumer expectations and the ways in which they shop have changed, forcing retailers to adapt or go the way of the dinosaurs. Technology has advanced faster in the last 5 years than it has in the last 20, further fueling the silent arms race between consumers and retailers, and redefining what retail is.
Not too long ago consumers saw advertisements on TV or in print, or heard them on the radio, prompting them to visit the brick-and-mortar locations to obtain the sought-after goods, or if they had time to wait and the retailer had the ability, they would order through catalogs by phone or snail-mail. E-Commerce, led by giants such as Amazon and eBay began nearly 20 years ago and began to change the concept of shopping. Though its success has been slow, the E-Commerce Sales channel has grown to reflect 7.5% of Retail Sales, and shows no sign of slowing.

Nine years ago, Apple unveiled the first generation iPhone, and without realizing it (or perhaps so), had sparked the Smartphone Revolution that would soon change the world of retail forever.

“This is a day I’ve been looking forward to for two and a half years. Every once in a while a revolutionary product comes along that changes everything.”

In the 9 years since its first unveiling, there have been five more generations of the iPhone as well as a variety of competitor’s devices, all fueling the growth and expansion of the technology and its reach. Today, according to Pew Research, 72% of American Adults and 68% of Canadian Adults own a smartphone.

This is especially interesting considering the fact that the smartphone has had a much faster rate of adoption in less than a decade, than the personal computer has in the last 30 years, and in fact, PC ownership is declining with the rise of smartphones, tablets and other mobile devices.

It is this technological change by consumers that is fueling the Retail Renaissance. In 2010-2011, M-Commerce began to grow as a mobile, smaller off-shoot of E-Commerce. Fueled by the ubiquity of smartphones and retailers who began to see the benefits of what was at the time a buzzword, but which is now the reality, of Omni-channel Retailing. In the 5 years since its true start, M-Commerce has begun to gobble up a significant percentage of E-Commerce sales, although its overall impact on total retail sales is quite small (1.6% in 2015). The growth, power and reach of Mobile devices and retail began to be felt and universally acknowledged during Black Friday 2014. On that day, Mobile traffic outpaced desktop/laptop traffic for the first time (52.1% of online traffic – IBM Benchmark Report – Black Friday 2014), as consumers scoured the web in search of the best bang for their Black Friday bucks. The majority of Black Friday E-Commerce transactions were completed by desktops, however M-Commerce still accounted for 27.9% of online sales. A quote from the IBM 2014 Black Friday Report was especially poignant, and expressed the true state of the new consumer:

“This trend may indicate that shoppers are becoming more comfortable and digitally savvy in how they use online coupons and rebates to secure the best bargains.”

This was shown to be true even more the following year. In 2015, Mobile again set new milestones on Black Friday, capturing 57.2% of all online traffic and a surprising 36.2% of online sales to a tune of about $900 Million (As illustrated in the 2015 IBM Benchmark Report for Black Friday). M-Commerce continues to grow, and within a few years we can predict a sizeable percentage of Retail sales occurring on our small digital devices.

Mobile has changed the ways in which we live, work and now shop. In almost any retail store you visit today, you will observe shoppers on their mobile devices, chatting with friends, checking their social media feeds, looking up product details or prices, or any variety of activities. You may have heard the term “Show Rooming” which is where customers examine your merchandise in-store, and then purchase online at a lower price. Many retailers at first tried to combat this trend by slashing their prices, offering price matching guarantees or by offering in-store exclusive products in an attempt to retain their customers. Short of the exclusive items, or by offering in-store value-added-services or readily available product information (to avoid having customer looking online), most are having difficulties in doing so. Part of the allure or need for Show-Rooming, is the consumer’s need to physically see or interact with the product(s) they are interested in, the one aspect the online world cannot achieve.
Another factor of the online equation which is not readily evident in the channel sales figures is Web-Influenced Sales. Deloitte Digital has studied this aspect of modern retail in a report called The New Digital Divide in which, Deloitte Digital examines the relationship between the online world and its direct impact on in-store sales, which was reported to be approximately $1 Trillion at the end of 2014. In what Deloitte calls the Digital Influence Factor, there were key metrics examined between online activities, prior to and during store purchases that involve digital devices:

Despite the findings of Deloitte Digital, and others, 2015 was a challenging year for retailers. Whether directly related to the warm weather heading into the holiday season (which hurt Retailers who had invested in winter apparel), or due to the rise of E-Commerce and M-Commerce, it raises questions regarding the state of the retail industry as a whole. We all remember the recession that followed the sub-prime mortgage crisis, and how retail sales contracted due to a lack of consumer confidence and/or lack of income by those affected directly/indirectly. E-Commerce was also affected by the drop in consumer confidence, but not as hard, perhaps the budget-strained consumers spent more online in search of the best bargains.
In 2010 Retail Sales made a slight come back in year-over-year sales, and then began to fizzle again in 2012 (Seen in figure 1). Last year, in 2015, total retail sales increased 1.42% over 2014, but when you separate the Brick-and-mortar and E-Commerce components, you begin to see two separate stories (As seen in figure 2). The E-Commerce rate of change in year over year sales has been impressive since the sub-prime mortgage crisis, equating to about an average of 14% per annum, while in-store sales have been on a slippery downward slope for the last 6 years. In 2015, E-Commerce sales increased by 14.6% over 2014 or by $43.5 Billion, while Retail Brick-and-Mortar sales slumped to their lowest level of growth at 0.51% over 2014 or by $22 Billion. At the current levels of growth and decline, it would appear that E-Commerce would be poised to take an ever larger slice of the retail pie in the next few years. 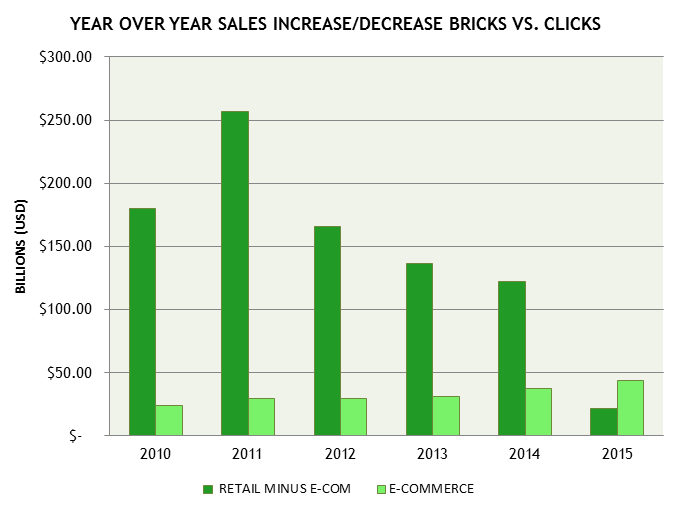 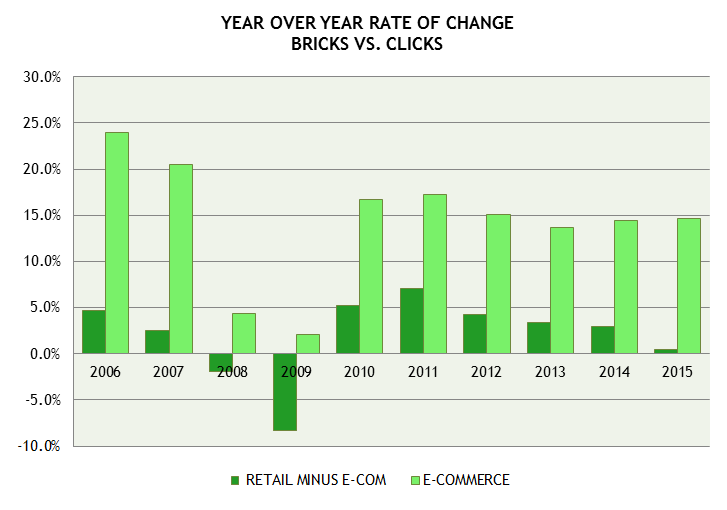 This is perhaps why Retail is in need of a Renaissance, which by definition simply means renewal, or rebirth. Retailers are in need of ways to draw traffic, and more importantly sales, into the Brick and Mortar space if they are to survive the next decade. Or perhaps the answer lies in E-Commerce and a lovely little acronym: BOPIS. Buy Online Pickup In-Store is not a new concept, but it is one sure-fire way to return your online customers to your offline space, while reducing individual E-Commerce Fulfillment costs simply by utilizing your in-store inventory and bypassing carrier fees to fulfill the orders. The challenges for some retailers however, beyond justifying the ROI, is doing it well and satisfying your customer. In our previous article, Click & Collect: The In-Store Fulfillment Challenge, we discussed findings from a 2015 JDA Consumer Survey which showed a large number of retailers who are failing the grade when it comes to BOPIS. If the retailer is able to overcome the technological challenges of integrating their distributed order management systems, POS and ERP, they seem to be failing on the human side of the equation, whether it relates to business processes or change management.
Today’s consumers have changed: they have higher expectations from the retailers, and lower thresholds for their patience. They’re looking for a frictionless journey to purchase in the way that suits them best, and with all of the competition out there, you have to be able to offer them the most seamless and most personalized path to purchase to be able to obtain both their loyalty, and their sale. Today’s consumer is ever-connected with their devices, social in their interactions online, well informed and digitally savvy in how they use that information. In a study by Think with Google in February 2016 (Winning Omni-Channel Shoppers in Their Micro-Moments), it was noted that 82% of shoppers say they consult their phones about purchases that they’re about to make in-store, and goes on to report that a staggering 1 in 4 shoppers have changed their minds while in a checkout line after looking up details on a smartphone. These details could be product reviews, or better prices elsewhere, but they also could relate to social media and the effluence of CGC’s (Consumer Generated Content) readily available. A 2016 Bazaar Voice study (The ROBO economy: How reading reviews impacts offline sales) highlighted this trend by saying:

“Forms of content can include everything from a critical rating or a comprehensive review, to a picture, a video, or a brief comment. It can be a rich experiential story, or an uncontrollable emotional outburst. Far more often than not, the time and effort to create and share this content is driven by the will of people to help, inform, protect, entertain, or inspire confidence in other consumers.”

All of these points tend to show how brand control and customer loyalty have been almost completely removed from the retailer’s hands, and that the ever connected consumer is slowly winning the war. Monthly, Quarterly and Annually, Total retail sales continue to grow, but Brick-and-Mortar growth is slowing (if not dying) while its digital counterpoints enjoy the spoils. As the end of March, and the end of the first quarter of 2016 draws to a close, we will have our first indicator of the direction Brick-and-Mortar sales for the remainder of the year and beyond. Retail needs a renaissance, or perhaps this is the renaissance, a change in the method and delivery of retail shopping. Only time will tell. 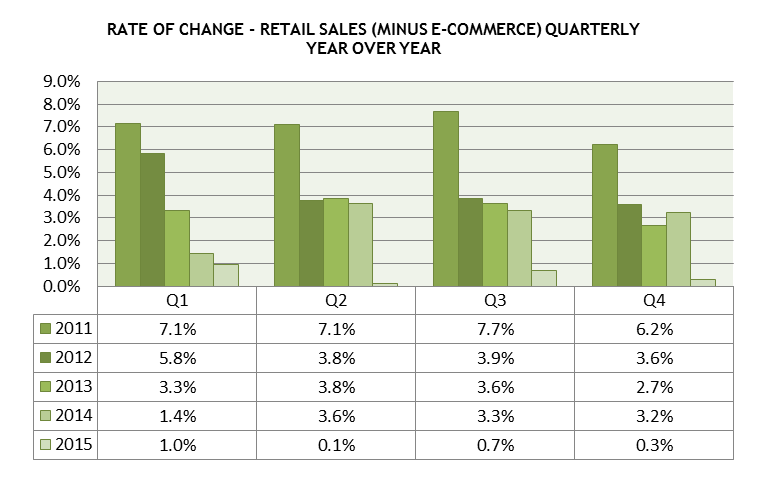 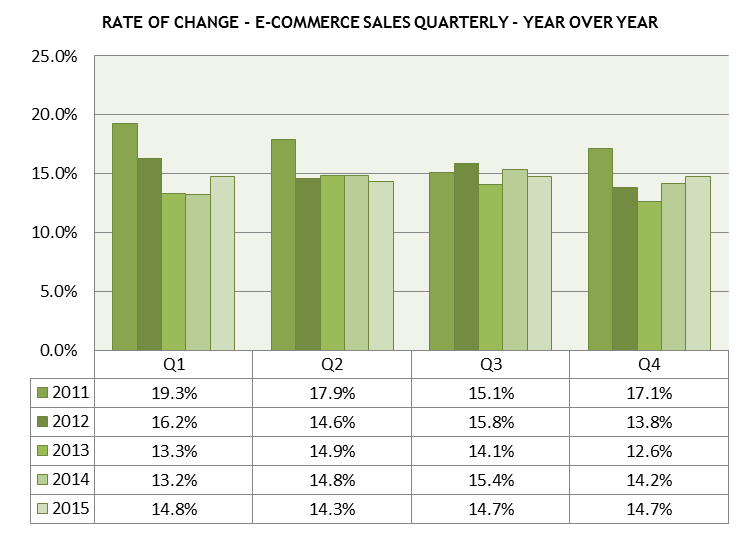 At A2R, we’ve made a business out of helping Retailers to better serve their customers. We keep an eye on the trends retailers are facing and adopt our strategies accordingly so as to be able to offer the most optimized business processes or cutting-edge pieces of Retail Technology to help resolve their pain-point. We invite you to discover the difference A2R can bring to the table.
Contact us today – info@advantage2retail.com