$ocial Media: The Next Commercial Frontier

$ocial Media: The Next Commercial Frontier

$ocial Media: The Next Commercial Frontier:

As we have illustrated in our previous articles (E-Commerce Evolution, M-Commerce Revolution and Omni-channel: Commercial Omnipresence), the Internet, Smart Phones and Social Media have changed the face of modern retail. While the lion’s share of sales still exist within brick-and-mortar locations, the digital rise in commerce has led to the evolution of the how, the when and the why customers like to shop.

Social Media, while only 11 years old now, has changed the world. Billions of people use social networks daily to connect with friends and family, share ideas and media, and for retailers it has been a way to build brand awareness, and to connect with their customers in deeper, more personal ways.

Smart Phones now a little over 8 years old (since the birth of the first generation iPhone in 2007) have furthered that interconnectivity, and the newer generations have grown up in a world of instant gratification, which has helped to evolve the Omni-channel retail need. eCommerce has grown by leaps and bounds, and has garnered upwards of 8% of total retail sales in recent years, while mCommerce’s (mobile commerce) growth has been astounding, growing to over 20% of eCommerce sales in 5 years.

Last Thanksgiving weekend (2014) a new milestone was reached as Mobile traffic for the first time, outpaced that of traditional desktops, illustrating the change in the ways in which consumers now like to shop. While the majority of retail sales still continue to occur within stores, the path and journey to purchase has changed. Armed with Smart Phones and Tablets, as well as desktop PC’s and MacBooks, today’s shopper blurs across the traditional silos of multi-channel sales, choosing their optimal and comfortable path from inception to purchase.

Retail has been forced to evolve to survive, and so we see a current state of Commercial Darwinism as the strong adapt and survive, while the weak fall. Retailers who adopt a strong Omni-channel strategy are able to reach their customers across channels, using today’s technologies like CRM (As we illustrated in our article CRM: The Single View of the Customer) are able to follow the customer’s path to purchase, and through programs like loyalty, are able to better position their offerings, digital and otherwise, to greater effectiveness through personalization.

Social media, as previously mentioned has been a strong tool for Retailers to reach their customers, and to enforce brand awareness, and by utilizing Advertising campaigns on Google, Facebook and Twitter, they have had a hand in growing the eCommerce giant into what it is today. While reach across the social networks has been vast, the overall conversion rates have been low, tantamount to 1-2% of eCommerce sales.

Part of the issue with conversion could deal with the frictions a lot of today’s customers experience with Mobile websites and having to share information with retailers, especially in light with the flood of security breaches over the years. That may be poised to change with the latest ventures by the major social media networks, with the advent of the buy button. There have been attempts through the years to monetize on Social Media, but the efforts all failed in either redundancy compared to eCommerce Sites, lack of use, or complicated procedures that added to the frictions the Mobile customer faces.

Social commerce, while traditionally built through ad referrals is about to change, rather than advertise and redirect the user, the major Social Networks are experimenting with in-app purchase on mobile phones, while still within its infancy and beta testing, this could further revolutionize eCommerce, brand awareness and clout for retailers. 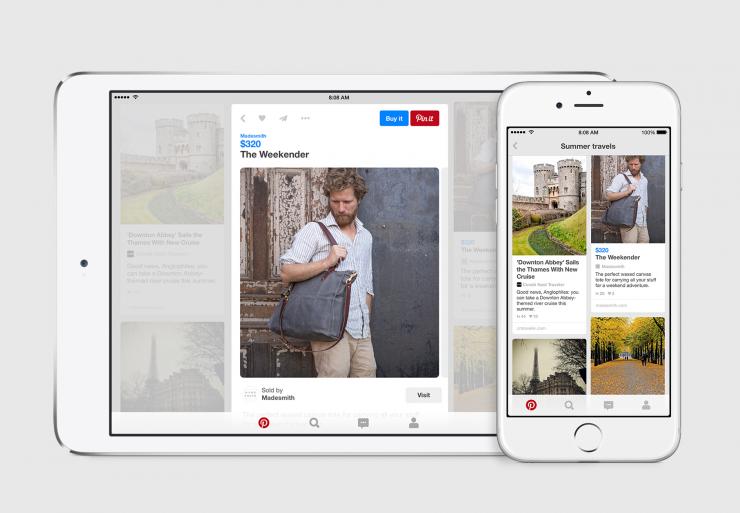 The only social Network that has yet to go public, is the first to successfully launch their Buy Button in the form of a Buyable Pin. For those not aware, Pinterest is a network which can be best described as Social Scrapbooking. While its user base has been a female majority, the male population is growing. Pinterest allows users to pin photos and media to their online “scrapbooks” to share with friends and other users.

Pinterest has been growing in popularity, and for retailers it has been a way to expand brand awareness and product images. For a while now there has been a user demand to be able to purchase the items pinned, and so through a partnership with Payment Processors Stripe and Braintree, Pinterest launched the Buyable Pins.

Whenever a user comes across an item with a blue “Buy it” button they are able to purchase the item directly from the retailer without leaving the Pinterest app. Currently only available in the US and on iOS devices, users click the blue “Buy it” button, and proceed to checkout, Strip and/or Braintree process the payment and securely vault the user’s information for future purchases, further reducing the frictions of mobile shopping while providing safety and security of their infomation. Retailers fulfill the orders, and the charge appears on your credit card statement from the Retailer, not Pinterest, Strip or Braintree. Currently Pinterest has 100 million active users globally, and around 47 million users across the U.S.

Twitter has tried for many years to monetize on their followers, and with little success. Their ad revenue has been growing, but pales in comparison to that of Facebook and Google. For those not aware, Twitter is best described as a micro-blogging site, the social media platform allows users to share 140 character tweets, photos, videos and now live sharing across Periscope/Meerkat. Twitter has partnered with Stripe to launch a new tool that allows merchants to sell their wares on Twitter with a “Buy” button.

The service is called Relay, and like Pinterest, the user will not leave the Twitter application to complete a transaction they initiate by clicking the Buy button. Similar in many ways to Pinterest’s arrangement with Stripe, payment and address information is vaulted securely for future use after the initial purchase. Twitter will be promoting the service with more than 200,000 retailers who currently rely on Stripe to power their online payments. Twitter currently has some 316 million users globally, and approximately 53 million users within the U.S.

Touted by Forbes Magazine to be the greatest advertising platform the world has ever know, Instagram was purchased by Facebook back in 2012 for $1 Billion USD. The social network allows users to share photos and videos, and for retailers has been a way to expand brand awareness and interact with users on their products and services. In 2013 ads began appearing in users feeds, with some measure of backlash, however the world-wide user base has recently grown to 400 million, approximately 78 million within the U.S. alone.

Instagram is launching a series of buttons like “Shop Now”, “Install Now”, “Learn More” and “Sign Up” buttons allowing users to buy a product, install and application, get more information or sign up for a service. Like Twitter and Pinterest, clicking on any of the buttons will not exit the application, it will launch a mini-browser allowing users to complete the action, and once done, returning them to their Instagram feed.

Currently, the process will not support in-app commerce (yet), relying instead on the linked websites/app-stores the call to action buttons connect to. The bright side of the equation for Instagram currently will be the integration of Facebook’s Ad engine, allowing marketers a chance to exploit a wider range of demographic and interest data, rather than Instagram’s previous targeted ads engine which was based on age gender and country.

Instagram wants to make its advertising available to businesses large or small by integrating Facebook’s ad-buying tools and an Instagram Ads API, the latter will plug Instagram into a broader ecosystem of social ad platforms. So while the integration of Facebook technology will allow marketers greater ability to market to Instagram Users, the true lack of ecommerce technology within the application still leaves it room to grow. Regardless, Instagram still remains a beautiful application for photo-sharing and for companies looking to expand their brand awareness through magazine-style ads. With the now in-app ability to connect users from product to purchase, Instagram remains as a powerful marketing tool.

The Grand old Dame of Social Media has had several failed attempts at social commerce over the years: First was their Facebook Stores concept back in 2011 where merchants like GameStop, Gap, JCPenney and Nordstrom’s (to name a few) quickly opened, and then just as quickly, closed their Marketspaces on Facebook as they saw little return on investment, or redundancy compared to their existing eCommerce sites.

They tried also the Facebook Gifts concept, where users could send one another real world gifts through the site, but also failed as no one used it. They had been rumored to be experimenting with a Buy Button in featured ads last August (2014) with a group of select retailers on Shopify. The overall concept is similar to Pinterest’s which allows users to easily purchase items they see on their news feeds, or pages.

The buy button would serve as a “call to action” allowing users to quickly make a purchase for the item in question. Once the purchase is made, the payment information is secured and made available for the next purchase, allowing you to click the buy button on another item, and then click again to confirm. For Facebook, this would be a potential windfall, as according to Shopify:

“Facebook has the highest conversion rate for all social media ecommerce traffic at 1.85%”

By reducing user friction by being able to offer in-app commerce with a Buy Button, this could be a game-changer for the social media giant, and could vastly improve conversion rates for eCommerce sales. With over 1.5 billion users world-wide, approximately 157 million active American users, Facebook’s reach is unparalleled. 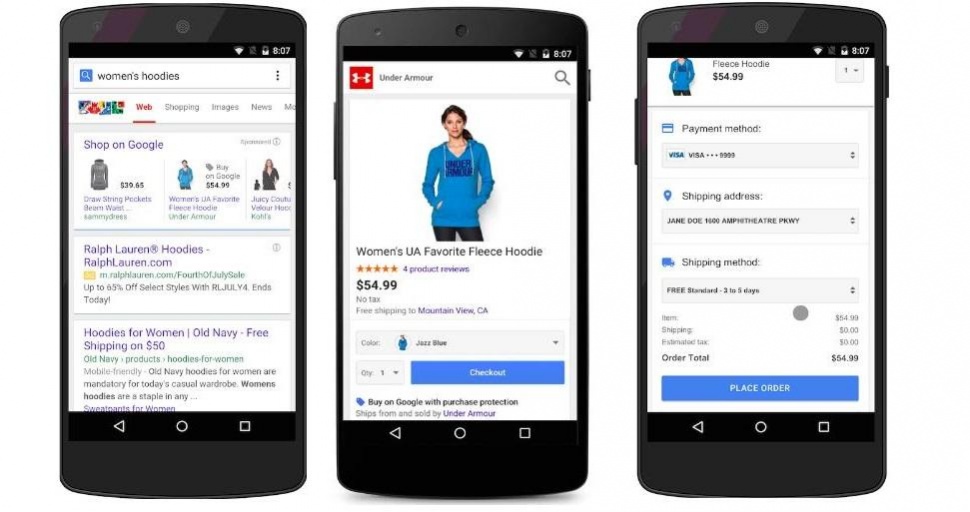 While no longer really a viable social media platform, Google technically does not belong as part of this article’s focus, however with their immense reach across the internet, and almost 20 years of marketing science under their belts, their foray into eCommerce could create immense, and interesting, possibilities.

Like the major social networking platforms, Google is experimenting with a Buy button, the difference being that their button would appear in promoted mobile search results. The services has been loosely called “Purchases on Google” and is based on the concept of reducing user friction with mobile browsing, with quick search to purchase action.

Google’s foray into mobile commerce is a smart one, as most people use Google as their default search engine, and Google AdWords is still the most successful reach any retailer has in regards to online marketing. With the global predilection shifting toward mobile shopping, Google’s move will put retailer’s sales offerings directly into the hands of those searching for them.

Last thanksgiving weekend showed the start of a large shift in global shopping habits. The smart phone has become a revolutionary device, and social media has connected the world in ways never thought possible. Social media’s true value is still in brand awareness and customer engagement; however the buy buttons being enacted by the major networks are yet another channel that retailers can use to capitalize on the new trends.

The lion’s share of Retail sales still exist in stores, but by marrying your social media, mobile and ecommerce channels you are ensure that wherever, however and whenever consumers like to shop, you are able to service their needs. Whether or not the buy buttons will equate into greater sales number depends on customer adoption and usage, some may reject the commercialism, while others may see it as the natural evolution of eCommerce, only time will tell.