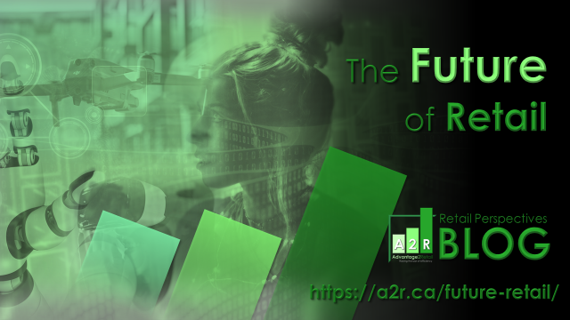 For over a decade and a half, Advantage2Retail has been bringing forth thought-provoking articles on the current state of the Retail Industry. With so much change and disruption currently facing the industry, we decided to take an in-depth look at what the industry has faced across the last decade, what factors are currently affecting retail as a whole and what direction the industry is heading into the next.

One cannot look forward without also looking back. In a previous article (E-Commerce Evolution), we spoke about the slow, but meteoric rise of the online channels, and how in the 25(+) years since its inception, U.S. Retail E-Commerce has grown from tens of thousands in annual sales, to 2018’s half-Billion, and continues its double-digit growth month after month, quarter after quarter. Brick-and-Mortar Retail has been growing, albeit at a slower pace over the last decade, and its story was dreadfully impacted by the Sub-Prime Mortgage Crisis (SPMC) of 2008-2009.

As of Q1-2019, E-Commerce made up just over 10% of total Retail sales, following Q4-2019 where E-Commerce represented 11.19% of un-adjusted Retail Sales. While this still represents a small sliver of the overall pie, keep in mind that it took twenty years to reach 6% of Retail Sales, and only 5 more years to push above 10%.

The double-digit growth in E-Commerce has been sustained now for the last 40 quarters following the SPMC while Brick-and-Mortar Retail growth has been relatively flat, and slower to recover following the economic disaster a decade ago.

At a time when consumers were losing their homes to foreclosures at an alarming rate, consumers were looking to save as much money as possible. E-Commerce, with their lower over-head costs, were able to offer the lowest prices possible, and is why E-Commerce Quarter-over-Quarter sales only saw a 4 Quarter period in negative territory.

Yes, this is still an immense sum, (Comparatively, E-Commerce generated its highest sales quarter yet in Q4-2019 at $158.5 Million), however it shows the drop in consumer spending at an alarming rate. E-Commerce rebounded quickly in Q4-2009, and continued its sustained double-digit growth, unabated to this day. Brick-and-Mortar Retail on the other hand, floundered, never cresting 8% in quarter over Quarter growth, and many times, barely cresting 1%. 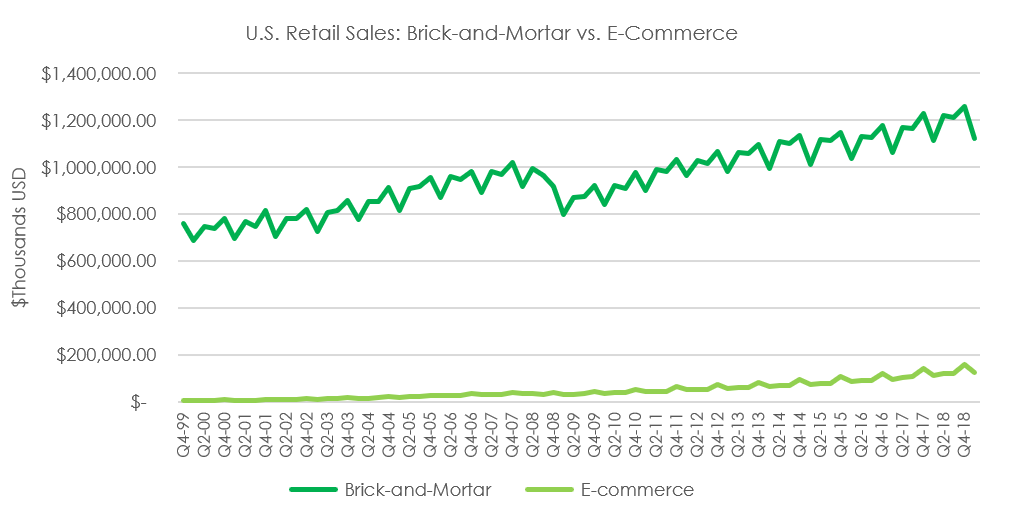 The growth pattern for Brick-and-Mortar prior to the SPMC had been building to what we see today, over $1 Trillion per quarter. While it reached the figure in Q4-2007, it was not until Q4-2011 that Brick-and-Mortar sales began to wobble back-and-forth over the trillion-dollar line, and only as of Q2-2014 that it finally remained north of the line on a consistent basis (Currently averaging about $1.25 Trillion per Quarter).

What this data illustrates is that consumer spending was nearly halted under the SPMC, and only thanks to the actions of the government, that the crisis was resolved, and consumers felt the confidence to spend once more. The consumers that emerged post-SPMC were different than they were before the crisis. They were more frugal, and most importantly, very comfortable with placing orders online, and were becoming more-and-more adverse to shopping in stores.

The Present aka Millennials and Amazon Prime Memberships

As Millennial Consumers (At one point the largest living consumer demographic) grew into their purchasing power, they did so at a point where their parents had narrowly avoided losing their homes. Unlike Gen-X, who had seen the rise of the Internet and E-Commerce, Millennials were true digital natives, never knowing a time in the early adult lives where they weren’t connected 24-7. They learned to value and embrace deals (despite reports to the contrary) and because they do everything on their phones, they were of the first to adopt the wave of M-Commerce (Mobile E-Commerce) which really began after the SPMC in 2010-2011.

While Millennial and Xennial (Yes, it’s a demographic, look it up) tastes began to evolve into Luxury brands as their incomes grew, it was their demographic slice of the consumer base that saw the value in subscription services, which lead to the largest leap forward for Amazon, the Prime Membership. As a Prime Member, shipping is free (relatively) providing an incentive to consumers to shop on their website, and as a member. Currently there are over 100 million Prime Members, who are spending each over $100 USD for their membership fees, plus their daily/weekly purchases.

Amazon was one of the pioneers in E-Commerce, beginning as an online bookstore on July 5th, 1994. This was at a time when the Internet was just beginning and endured in a time when less than 50% of households had a PC, let alone online access. They persevered and grew; adding diversity to their products across the last 25 years, and as of the end of 2018, they were selling nearly everything, and generating over 50% of all U.S. E-Commerce sales. What this represents in terms of total retail sales was about 5 cents on every dollar spent.

Millennials love shopping online almost as much as they love avocado toast and are estimated to spend 60% of their discretionary funds online vs. in physical retail. Much ado has been made about Gen-Z preferring to shop in-store, but let’s be honest, the vast majority of Gen-Z are tweens and younger, and do not have the requisite credit cards to spend their money online. Gen-Z will continue to prefer shopping in stores for as long as it is convenient, which is about the time they join the ranks of the rest of us, and then only time will tell what their shopping habits will be.

In the ten years since the SPMC, we have seen a huge growth in consumer spending and confidence, and that growth has mostly been spent online, fueling the Amazon’s and Walmart’s and eBay’s of the world. Consumer spending slowed during the last few months, as their confidence was shaken by the current administration’s ill-timed trade-war with China, and the rest of the world.

The Future aka Gen-Z and the Automation Generation

As E-Commerce grows, and its share of total retail sales projected to grow between 15 and 30% (A2R estimates between 22 and 25%) by 2030, Brick-and-Mortar, not to mention the rest of the retail industry, is in a bit of a pickle.

Automation. It’s a word that threatens the survival of blue-collar jobs across the U.S., as manufacturing, logistics, restaurants and retailers become automated in some fashion, it is estimated that 39 to 73 million jobs will be lost to automation in the U.S. by 2030. We are already seeing the signs of this today with the world’s largest E-Commerce retailer, Amazon, who currently employs robots in their warehouses and are looking to deploy a fleet of drones to deliver packages.

While it is true that some jobs may transition, and new jobs will be created to work in conjunction with automation, the current reality will be replaced by a new one. By 2030, the Baby-Boomers will become the new Silver Generation, and Gen-X’s small demographic will be on the verge of retirement (if they can afford it), Millennials and Gen-Z will make up the bulk of the workforce, and will have to compete with Robotics and AI for their employment. Unless Andrew Yang is elected, or someone else adopts his concept of a universal basic income, it may be hard to find work for the 162 million younger Americans, especially with the as-yet-to-be-born-and-named Generation to follow Gen-Z, nipping at their heels, looking for summer employment.

With all of that in place, let us illustrate a concept of retail a decade from now.

Janae Ortiz-McDonnell wakes up to the soft chiming voice of her virtual AI assistant. Like many of her parent’s generation, she checks her updates on social media, albeit through her augmented reality headset, and looks over her schedule for the day. As she flicks and gestures her way through 3D videos and stills, she is inundated by hundreds of subliminal, and not-so-subliminal ads, until one strikes a chord. Her favorite store is having a sale, and the dress she tried on virtually a week ago is featured in the ad; actually, featuring her likeness in the dress in the ad, due to the AI-Programmatic marketing engine.

She decides to make the purchase, as the AI forecasted that she would, and has already prepared the shopping cart with the exact size and color she wants and needs, pre-authorizing the sale on her preferred method-of-payment. All that is left is for her to finalize the sale and to decide if she wants a remote drone delivery within the hour, or if she’d like to pick it up in person at several locations close to her home or job.

Yes, this level of shopping technology and ease may be further away than a decade or considering the speed of technological advancement in the last decade, it may be less Science-Fiction and more Science-Fact than we realize.

Regardless of the distinction, we will see many changes to come in the next decade, and as usual, A2R will pay close attention and help to guide our clients to weather the storm. To learn all the ways that A2R can help your Retail business please visit our website.