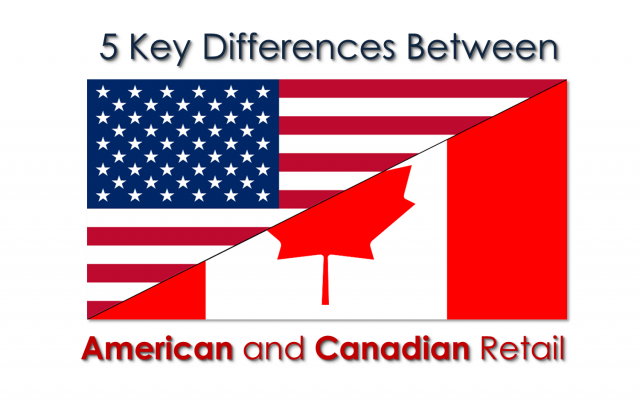 Although many American companies wish to expand into Canadian retail, the market remains elusive to the majority of U.S. businesses. There’s success to be had for U.S. retailers that take the time to understand the Canadian market. Big box retailers Nordstrom and Saks Fifth Avenue recently decided to venture into the Canadian market, as well as the millennial eyeglass heavy-hitter, Warby Parker.

Still, Target’s epic failure in the Canadian market should serve as a cautionary beacon for American companies hoping to jump into Canadian retail without doing their research. The following key differences should be taken into account by retailers hoping to make an informed decision.

The fact that Canadian currency is 74 cents on the U.S. dollar can be misleading. There are other factors to take into account. Canadian sales tax, for instance, varies by province and can reach upwards of 15 percent. Also take into account the 11 dollar minimum wage and import duty. Although the import duty fluctuates based on the weight and value of the goods, it can cost up to 35 percent and is listed by many Canadian retailers as the reason they don’t do business overseas.

Due to taxation and import duty, Canada manufactures many of its own clothing. This results in unique brands manufactured in and for the country, including everything from gas stations, to life insurance to high fashion outerwear built for cold winters. Hudson’s Bay, Lululemon, and Herschel are Canadian brands — but, due to cost, American brands have more trouble acheiving success over the border.

In Person Over E-Commerce

Canadians prefer to buy in-person over online. In fact, e-commerce only represents about 4.5 percent of total retail sales in Canada, compared to 7.7 percent of retail sales in the United States.  And malls? They’re still hopping in Canada. According to the RCC (Retail Council of Canada), the Eaton Center in Toronto, the biggest shopping mall in Canada, had almost 9,000 more annual visitors than the Mall of America in 2015.

Whether the success of brick and mortar retailers in Canada is due to the cold weather outside, or due to consumer preference for feeling clothing before making a purchase, retailers hoping to break into the Canadian market should consider investing in bricks over clicks.

There’s a general consensus among American consumers who have shopped across the border:

“We outsource so much of our stuff that it seems like the quality in Canada is better. You get what you pay for in Canadian retail. It is proof of what American retail has potential to be,”

Perhaps the difference in quality is due to Canadian manufacturing of Canadian brands, or due to the fact that Canadian consumers value comfort and longevity over brand names.

Willing to Shop Around

Regardless of reason for the ample expectations of Canadian consumers, the retail precedent is higher in Canada. Consumers not only expect high quality and low cost, but they’re willing to shop around until they get it. Brand Spark reports 57 percent of Canadian retail customers will visit multiple stores to get the lowest price on a product.

While luxury brands such as Prada, Chanel and Christian Dior may have found forever homes in the competitive world of Canadian retail, the discount sector is on the rise.