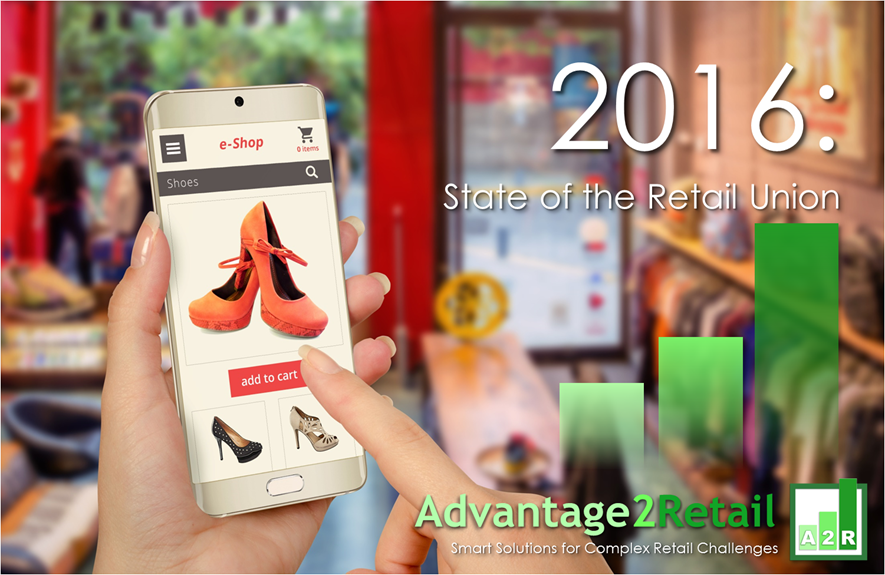 The current state of the Retail is one in flux. Retail has changed more in the last five years than it has in the last fifty. E-Commerce, the once silent threat, has exploded in popularity and usage; led by online giants like Amazon and are claiming a larger and larger piece of the pie each quarter. E-tailers are now making forays into the physical world; opening brick-and-mortar stores, pop-up shops and click-and-collect locations further challenging the domain of Brick and Mortar Retailers.

Consumers have changed. A generational shift occurred that has made the Millennials (aged 18-34) the largest living demographic, followed by the recently supplanted Baby-Boomers (aged 51-69), and rounded closely by Generation X (aged 35-50). The younger X’ers and Millennials are tech-natives; having grown up in a world surrounded by computers and the internet, and have been the most prolific adopters of new technologies like the smartphone.

Millennials, Smartphones and Social Media. The trio are redefining consumerism, and retail in general. With an estimated $200 Billion in annual spending (And an estimated $10 Trillion over their lifetimes), this demographic is clearly a force to be reckoned with, and the reason many retailers are scrambling to accommodate their wants and desires. Social Media and the ever-connected consumer have access to near-unlimited information, and giving the power of choice and the power of opinion; so much power, in-fact, that they are forcing an evolution on the retail world, one that many retailers are not yet able to cope with.

Herein lays the heart of the problem. The great Retail Machine has been chugging away for well over a century, and in the beginning, very little advances in technology were required or made. Computers simplified and automated a number of tasks, enabling retailers to be more efficient and cost-effective, and optimizing processes overall. In the earliest days of retail and computers, various systems were employed to manage the transfer of goods from one location to another, or to track the inventory, sales and returns at store level. As computers became more powerful and capable, retail systems became more advanced, and many efficiencies were gained that saved both time and money.

As Personal Computer usage grew, and the internet came into being, it was almost fated that E-Commerce would come about, and over 20 years ago it began its slow evolution. The few caveats that slowed the modern popularity of E-Commerce as we know it now, is that few households in the mid to late 90’s had a PC, let alone internet access. As reported by the US Census Bureau, in the year 2000, only 51% of US households had a PC, and only 41.5% had Internet access. By the year 2000, E-Commerce represented less than 1% of total retail sales, and was more of a passing curiosity than a threat. Personal Computing usage and Internet access and speed evolved, which also helped the Retail Industry, allowing their stores and warehouses to be centrally linked with their head-offices, speeding up the reporting of sales and inventory data.

Cellphones continued to evolve as well, and were starting to appeal less to just business users, but also to end users as well. It was the integration of touchscreen technology that changed everything and began the Smartphone Revolution with the first generation iPhone in June 27th, 2007. Suddenly, Apple made the Cellphone cool and irresistible and set the stage for the youngest generation to take over.

Millennials and their Expectations:

Because Millennials (and younger Generation X’ers) have grown up almost always having computers and the internet, they have come to a certain sense of entitlement when it comes to technology. To put it shortly, it just needs to work. If it doesn’t, this diverse group of young adults will quickly move on to something else that will.
The same is expected of Retail Technology and Retailers in general. The Smartphone has simply amplified this expectation, and with E-tailers like Amazon, and technology services like Netflix, Millennials simply expect on-demand services that are curated to their needs and wants.

From the Retailers they expect a level of service that borders on experiential, and because they all grew up watching Saturday morning cartoons, and have seen endless advertisements in their lifetimes, they are nearly immune to marketing.

They want to have things recommended to them on a personalized level, not a generic pandering to the masses. They want to be known without having to share their information, and they expect to be able to transition from device to device to store seamlessly, without loss of information or experience.

Basically: “Don’t sell to me, recommend things to me so that I may choose what I want”, “Allow me to choose my own adventure” and “You should already know what I want, so make sure it is available for me when I come to claim it”. That may sound slightly narcissistic and ego-driven, but it is the level of expectation that this generation has developed due to a lifetime of instant gratification.

Due to their native adoption of technology, and their post-school socializing tendencies, it was only natural that Social Media was both invented by, and widely adopted, by Millennials. Because Millennials for the most part have gravitated towards smartphones from their old laptops and tablets (old being a flippant term here) it was also only natural, that social media gravitated and was improved on smartphones.

Millennials are in near constant contact with their friends and family (Mostly the former and less the latter) and social media enabled smartphones have created an overlap between the online and offline activities they enjoy, and as well have created scenarios for Omni-communications, and seamless conversations that may begin by text, transition to Facebook, Twitter or Snapchat, before being resume IRL (In Real Life for the acronym-challenged).

These factors affect both the millennial expectations of retail and of customer service, and as well the need to share, evaluate and decide on purchases in groups rather than alone. While Social Media companies look to monetize on their networks, Millennials have been using them for some time; as a place to evaluate brands and products, obtain discounts, share purchases and experiences with one another, or another channel for them to reach out for post-sales service related inquiries.

To a Millennial, ordering from their phone would be considered second-nature. They can order a pizza for delivery or place a reservation at a restaurant through apps, hail a ride through Uber, download books, movies, TV shows or music, all with a few quick taps on their phone; so why should ordering from a retailer be any different? The reality is unfortunately quite a bit different.

Retail mobile checkouts are in need of redesign, and while many Retailer Apps have gotten the process down to a few taps on easy-to-locate and easy-to-use checkout, Browser checkouts require a bit more. Due to preventing online credit-card fraud, E-Commerce sites require quite a bit of data-entry on the part of the consumer. Yes, much of this information can be stored within an account, but as Mobile users do not have physical keyboards and have reduced screen sizes, it can make the checkout process a bit cumbersome and many will abandon efforts in lieu of their old Desktop/Laptop or Tablet.

Many retailers have made the effort in redesigning their mobile checkouts, and while this is a positive step in the right direction to accommodate a growing user-base, most still require far too many taps to complete the process. Retailer apps are one alternative, but consumers, especially Millennial consumers, do not want to have to add a separate app for each store they wish to shop at, leading to many more users browsing, than buying, on mobile.

A recent report by Adobe Digital Insights predicts that M-Commerce will be making a huge splash in the E-Commerce pool this holiday season showing that at least 43% of smartphone users would be making a mobile order this year. With over 90% of Millennials currently smartphone-equipped and the digital forecast of $91 Billion this holiday season, the potential for many successful, and unsuccessful mobile checkouts is apparent.

Like it or not, Millennials are really only beginning their journey as the leading consumers. Their expectations are built upon their life-experiences, which have been made easier than the generation before by the technology they have been surrounded by for their lifetimes. Their interactions with Retailers will in many cases reinforce their beliefs, and rather than deal with a particular retailer who cannot master their BOPIS order (Buy Online Pickup In-Store), or who do not offer a streamlined Mobile Checkout, or cannot handle their service inquiries via a DM (Direct Message) on Twitter, they will simply move on to one who can.

Millennials, and the generations to follow them, are now the ones to set trends, to set the bar as far as expectations of products, services, and the sales process. There can of course be many generalizations in the above, as no two individuals are alike; however, as a group, the Millennials tend to lean in one way, while the Baby-Boomers leaned another. Times have changed; changes spurred on by unprecedented technological growth, and if anything the last five years have taught us, it is that things will continue to change, whether it is for the better or not.

Retail is in the midst of an evolution, and perhaps one that is needed. In interacting with Millennials, and employing Millennials who just “get it”, Retail technology is evolving to serve the state of the market; which is mobile, social, and fast-paced. The frenetic madness that is Black Friday is less than 3 weeks away, and may serve as the tipping point for Retailers who are unable to adapt to the modern landscape and their new consumers.